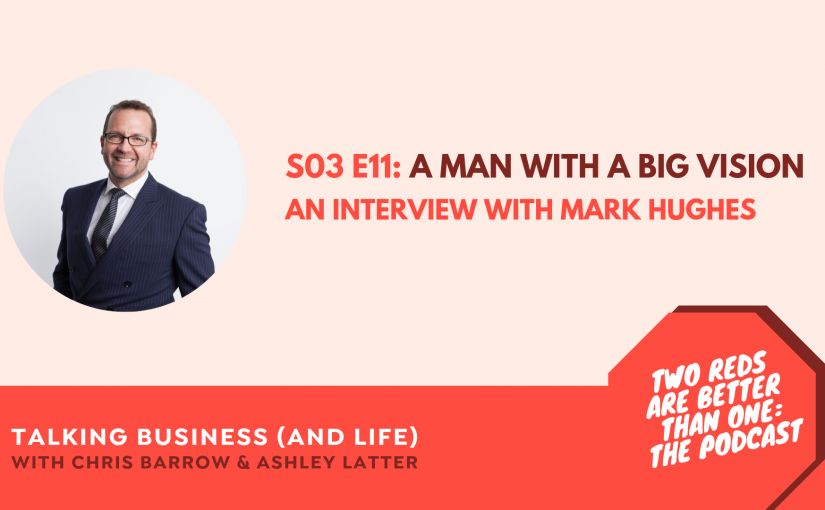 Hello, this is Chris Barrow introducing you to October 2019’s “Two Reds” podcast with my friend Ashley Latter and I want to start with a bit of an apology to our guest.
You see, Ashley came back from an Invisalign course recently and told me “I met this amazing dentist called Mark Hughes – we need to get him on the podcast, the listeners will love his story.”
So my apology is that I’ve known Mark for at least 15 years and have no excuse for not having mentioned him to Ashley before – sorry Mark, you are such an obvious choice, I’m kicking myself.
So here we have the engaging story of a young boy raised in Derry, Northern Ireland during “The Troubles” and learning to survive in a world full of danger from an early age.
Mark shares with us his journey from there to Dublin, to qualify as a dentist at the beautiful Trinity College and then (as so many of his contemporaries did) travelling to London to really learn dentistry by spending 3.5 years in the NHS system.
From there, one would have expected a transition into the private sector but Mark can (and does) surprise those around him and his next adventure was an extended trip around the world, taking in Latin America, New Zealand, Australia and South East Asia – even, at some stages, getting a bit of practice in for his clinical skills.
Eventually back in London, he bought a tired Covent Garden practice in 1997 and, you might say, learned the pleasure and pain of ownership.
But then came a life-changing moment when he was offered the opportunity to move to a prestigious Harley Street address in Marylebone and took the plunge.
What happened next was the evolution of both the Harley Street Dental Studio and, latterly, multi-location Group – one of the more famous high-end UK dental businesses of the early 21st Century.
At the moment, Mark is once more reinventing himself, having moved out of the hustle of Central London into the Buckinghamshire countryside and he has recently committed to another 4,500 sq ft development – this time a joint venture with a plastic surgeon to deliver an holistic range of health and beauty services.
Never a dull moment and Mark is very generous in sharing with us many of the “mountains, valleys and missiles” of his journey.
I’ll warn you – this is one of the longest podcasts Ashley and I have recorded – but we are confident that your time will fly listening, as it did for us.

You can listen to the podcast above, or using your favourite player or Libsyn. To listen to each episode as we release them, be sure to subscribe via iTunes, Stitcher or Google Play. Just search for ‘Two Reds are Better Than One’.

If you enjoyed the podcast, please visit the podcast website or iTunes store and subscribe. Please do consider rating the podcast on iTunes and write a short review for us. Writing a review helps us get the word out about our podcast.