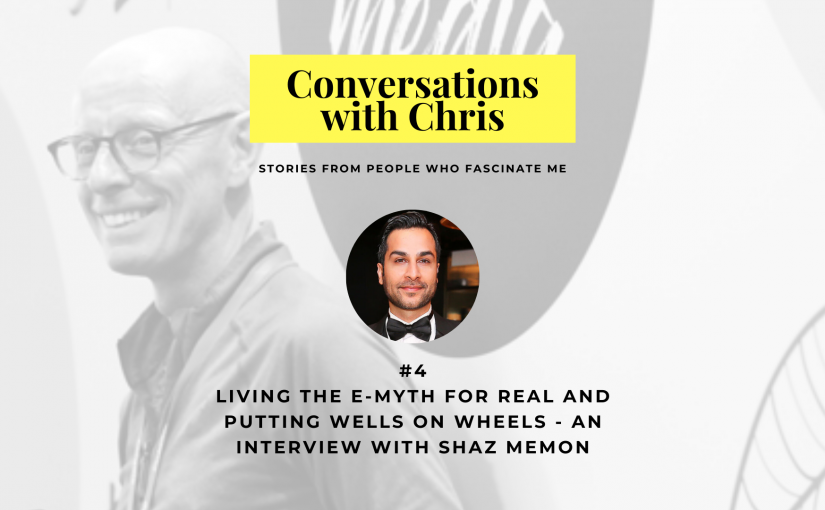 This month’s fascinating conversation began at a 2019 dental trade show, when I made the time to sit down with Shaz and find out more about his company.

I quickly discovered that Shaz isn’t a showman or a salesman, in fact 7/8ths of the person I met spends most of the time below the surface. The more I listened to Shaz’s story, the more I liked him.

Here we join him on his journey from 17-year old graphic designer in the bedroom of his parent’s home to an “office” in the garage where he spent the first years of his post-graduate life.

A classic “E-Myth” solopreneur, Shaz transitioned from graphic to web design in the early 2000’s and we learn how his first job for a dentist ended in a potential disaster that he was able to turn into opportunity.

After 3 years in the garage, working late nights and barely seeing the outside world, Shaz was burned out and demoralised but he did something about it and took the first brave step of hiring a part-time employee and pitching for bigger clients.

That grew to offices in Marylebone and a team of 23 – a real business!

In 2017 Shaz as a new father, Shaz realised that his balance could only be maintained by focus – hence the decision to concentrate on the dental market exclusively.

His team now limit themselves to no more than 5 new web sites per month and have a waiting list, born out of word of mouth recommendations.

The Digimax Dental mission is simply put – “to build the best web sites in the world for dentists” and during our conversation we explore what that means in real terms and Shaz’s predictions for how web sites will have to evolve in the next 3 years.

In the latter part of our conversation we take a look at the story of “Wells on Wheels” a charity formed by Shaz following a visit to India during which he witnessed young children and mothers walking for miles each day to carry water in harsh conditions.

Having resourced the manufacturer of a barrel that can easily be rolled, Shaz now finances the purchase and distribution of his “Wells on Wheels” and, since May 2019, has been able to help over 5,000 families. He intends to help many more. The charity has just been granted registered status and there are plans to grow.

Join me in the company of a quiet leader and hero.

Find out more about Wells on Wheels here – https://wellsonwheels.co.uk/