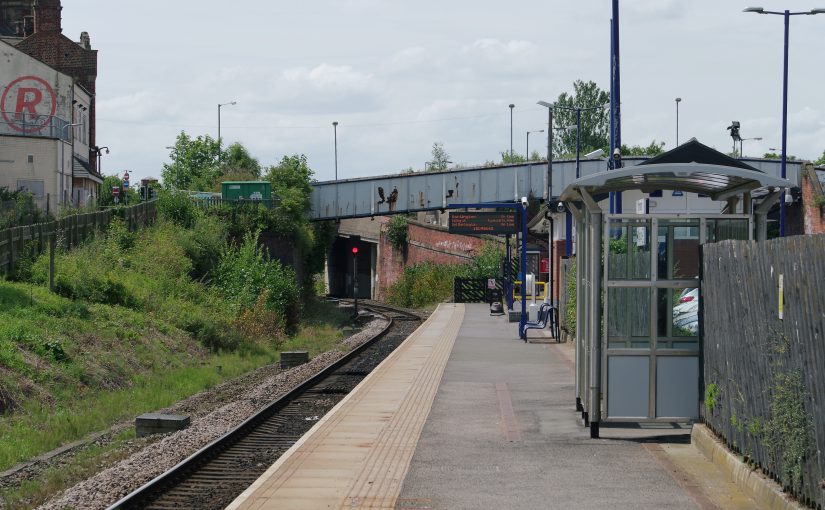 I’ve been in two minds about writing this post since the events described, which happened less than 24 hours ago. Having slept on it – I realise that, given that blogging is a catharsis for the author, I have to get closure.

The risk is that some will read this as a self-congratulatory piece – which is the furthest thing from my mind.

After a freezing 3-hour journey yesterday morning, leaving the station at Manchester Airport at 05:03 on a Transpennine Express with no heating or catering (another story), I arrived at Thornaby for a 30-minute wait for my connection to Hartlepool.

On the platform, around 20 people – equally frozen commuters heading my way and on to Hexham. In the small station waiting room, another 20 or so, huddled around a struggling fan heater.

As we stood around, stomped our feet and stared at smartphone screens, a taxi pulled up and out came the passengers and the luggage:

Anyone who has ever travelled to Africa will know how common a sight that is at check in. So it wouldn’t take much sleuthing to figure out that she was most likely catching the 08:03 back to Manchester Airport, a train due in the next 10 minutes.

Her challenge was to transport child and luggage from the pavement outside the station, through the waiting room and on to Platform 1. One small step for mankind but a giant leap for a Mum with her baby in the crook of her left arm and probably everything she owned in the world in front of her.

She began to haul the first suitcase through the waiting room, child in arms and……. well, you know where this is going don’t you?

Yep – the assembled commuters just stood there and watched her.

So – me being a “Rescuer” on the Karpman Drama Triangle – I was over there asking “can I help? in no time at all.

She, of course, gratefully accepted and the two (three?) of us made 4 journeys to get the baggage in to the waiting room and another 4 journeys to assemble her possessions ready on the platform.

I discovered along the way (her English wasn’t so good) that she and child were travelling to Namibia to be reunited with family.

My train arrived before hers and I had to wave her goodbye and speculate on how the rest of her day would evolve. She waved back and said a simple “thank you”.

So – this is NOT about me being a Samaritan – the Karpman Drama Triangle above was created by an expert in psychotherapy and transactional analysis and predicts that I’ll run over and help anyone – I can’t help myself (that’s why I’m a coach).

This observation is about the 40 people who stood and watched us – and not a single one of them offering to assist.

The cliche I rolled out when discussing this at home last night was, predictably, “what was wrong with those people?”

I’m a social media champion – I spend a fair amount of time staring at my own smartphone and posting but I do at least have one eye on my surroundings at all times.

So did our audience on Thornaby station platform – believe me, my African lady and I could not have possibly been missed.

Those passengers made a conscious decision to NOT help us; to abdicate, to ignore, to wait for it to go away.

I understand why we live in a world in which “can I hold your baby for you?” is no longer advisable (sad though that may be) but what happened to “can I help you?”

2 thoughts on “The lady with the baby”