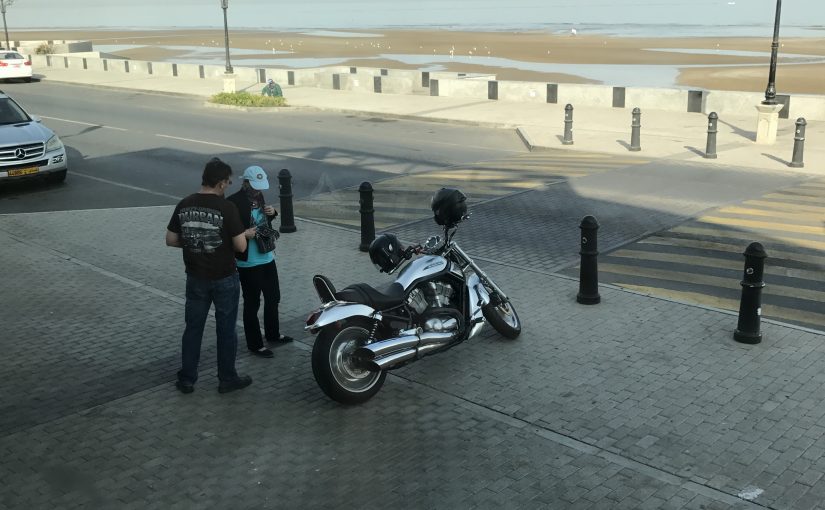 Yesterday’s Compulsory Basic Training with the good folks at Cheshire Biker Training was a useful reminder of how best we learn things and how we overcome our fears.

I’ve never ridden a powered bike before in my life and so approached the day with a mixture of anticipation and concern.

The route to CBT in Macclesfield began after I sat outside a beach-side Starbucks in Muscat, Oman last February and watched the coolest dude (a South African male in his late 50’s) roll up on his bike after a Saturday morning run then sip coffee as he watched the world go by.

That’s the photo above.

“I want to do that” was all I could think (albeit in somewhat less sunny Cheshire) and I was instantly determined to do something about it.

Cut to the car park under a grey sky at Macclesfield Rugby Club and my first four attempts at pulling away on a Honda 125cc ended abruptly with a stalled engine.

My emotions at that moment were frustration, a little humiliation and dread at the fact that my ambition could be stopped as quickly as the bike I was sat on.

Credit here to my teacher, Paul Belcher, whose patience, attention to detail and genuine appreciation were exactly what I needed.

Give that this is a biker training event – potentially full of testosterone – my fears were quickly put to rest – it’s OK to fail at the start – just get back on and do it again – but try this differently.

A few minutes later I pulled away successfully and begin to familiarise myself with the handling and the co-ordination.

Fast-forward 5 hours to 15:00 on Monday afternoon and the sheer exhilaration of a 2-hour ride around the Cheshire countryside, with Paul following behind and sharing directions, tips and instructions through our radios.

I can ride a motor bike!

On to more advanced training in August, with a view to a full licence.

The most interesting battles over the last few days have been mental – the challenge of a 35-mile running distance and riding a bike were two unknowns.

On both occasions there were moments when my internal conversation included “Why are you doing this to yourself? Will you finish? Can you really do this?”

What we learn by stepping outside of our comfort zone is that we are all capable of much more than we give ourselves the credit for.