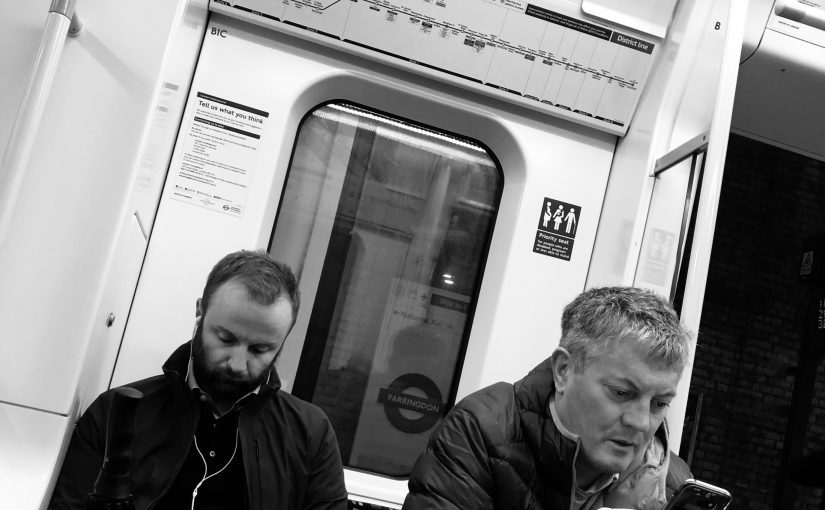 A lesson we were all taught as children.

One I frequently found myself ignoring as I seem to have been born with an insatiable curiosity around who people are and what makes them tick.

Goodness knows why – only child syndrome or something.

Last night, after Sheila and I had been on our feet all day presenting the Dental Sky workshop, Lisa Bainham and her colleagues from The Old Surgery spotted me on the opposite platform of Sandwell & Dudley rail station, waiting for my train to London.

There I am, absorbed in what’s happening on my iPhone X, oblivious to the world around me. Lisa had to send me a Facebook Message to say “hello!” in order to get my attention.

The photograph at the top of this post was taken on the Circle Line at 06:30 this morning.

The irony being the poster above these commuters, from mobile phone provider “3”, suggesting:

It’s a fascinating social experiment to put people in a long metal tube underground and rush them at speed across a city, whilst encouraging them not to interact with each other personally – because that’s good for the network and the game designers.

I guess that before the internet and the smartphone came along, travellers on the underground were reading newspapers and books, rather than staring at devices whilst listening to music. Maybe nothing much has changed about our behaviour – just how we distract ourselves and avoid human contact with strangers.

In my own defence, you know I can’t resist chatting to taxi drivers. I sometimes just don’t have the time to write all their stories up.

In the last 10 days I’ve been driven by a South African who escaped apartheid and never wants to go home, by a young Latvian (female) fashion designer who is living alone in the UK because she needed a break from her miserable family back home, by a Millennial Pakistani economics graduate sending money home as fast as he can – the list goes on of real people, real lives – and the incredibly grounding experience of knowing that your own troubles are relatively insignificant.

I’m going to carry on staring at people – and asking them to tell me their life stories. I don’t care if some people think it’s rude.

I’m also not averse to a little candid photography every now and then – here’s a favourite from a few weeks ago.