What is it about conferences that you grab a relatively early night (22:30 lights out), having had no booze and a carb-free meal – then find yourself wide awake at 04:00?

No – I’m neither depressed nor stressed about anything much nowadays.

Perhaps a combination of relentless air-conditioning, the break in routine and the accumulated mental baggage of a couple of dozen rapid fire conversations during the day?

In any event, the good news was 70 emails read and responded to before 06:00 and then a 10k training run before breakfast.

That’s another thing – the NEC does not cater for runners in any shape or form – south, the A45 dual carriageway, east the M42, west the runway at Birmingham airport and north a series of office parks and industrial estates – in simple terms, at this time of year you run until the street lights stop and then turn around in fear of death. 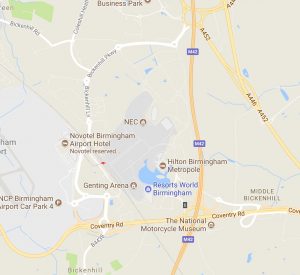 10:00 and the exhibition doors opened, allowing an ominously small number of visitors access to the exhibition hall and my day of back to back conversations began.

So I have to report that yesterday’s speculation as to whether attendance would be down this year is confirmed. I’m sure the organisers are advised by the same people who ran the POTUS’s inauguration ceremony but you heard it from me – Showcase is not busy this year.

Which makes it especially pleasing (cue sound of own trumpet-blowing) that Friday’s presentation for Practice Plan was a packed house, with all seats taken and standing in the aisles. Yep – the bald guy with the glasses can still manage to stop passers-by for a few minutes to listen to whatever he is babbling on about – tick.

I enjoyed the chance to chat to some the attendees afterwards and was surprised and delighted when a young chap came over and introduced himself with the words “I think you know my Dad?” – and there I met Richard Grieveson from Philips, whose father Jan and I attended a study club for coaches and trainers in the 1990’s and became good friends. I haven’t seen or heard of Jan for many years and it will be a delight to reconnect with him.

Highlights of my working day were:

Then, all of a sudden, it was 18:00 and we were getting chucked out of the hall – where did that go?

TBH, the best bit of my day was meeting Annie on the Bridge2Aid stand at close of play – she’s down to volunteer on their stand tomorrow and we have hardly seen each other in the last few weeks – so being able to attend the Bridge2Aid Bash last night with my lovely lady was a big bonus.

My energy levels were low by early evening but Mrs. Barrow herded me out of the hotel and over to The Vox ballroom in the Resort Centre, where we joined a very boisterous crowd.

Ever the volunteer, arriving without fancy dress was an invitation to disaster and it wasn’t long before the fluorescent pink tutu, socks and gloves were on board, producing some funny looks in the Gents during the evening and lots of laughter elsewhere. Ah well – all in a good cause.

Showcase month isn’t a great one for going sober – but we did stay until around half ten, when my body started really pleading with me to get to bed, leaving the revellers far behind as we chatted and walked back.

So – ever the optimist, I wonder if Saturday morning will bring a final rush of conference visitors – we shall see.

Here goes with another full dance card for the day, laced with the anticipation of getting home this evening.