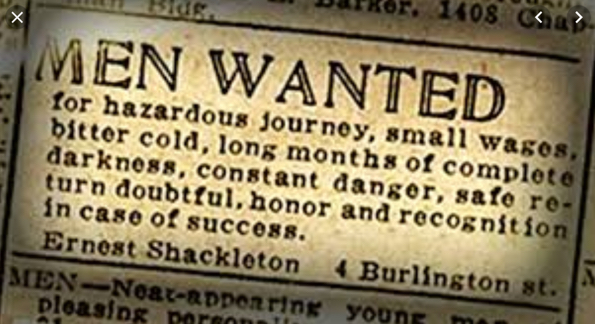 My visual today is the famous job advert reputed to have been placed in The London Times by Sir Ernest Shackleton before his ill-fated 1915 Antarctic expedition.

As an aside, the book “Shackleton’s Way: Leadership lessons from the great Antarctic explorer” has been on my business bookshelf for over 15 years and, as well as a ripping yarn, is a wonderful metaphor for leadership in business – yours and mine.

The irony is that the famous advert is, in fact, a fake.

There is no evidence that such an item appeared at the time in said newspaper (or any other for that matter) and, on closer examination, earlier versions of the text can be traced to the 19th Century in the USA.

After Shackleton’s famous rescue of his crew of 27 from a crushed, sunken ship and a thousand mile journey across treacherous ice floes and open water, he returned to a short burst of fame and glory (we Brits do love a good failure) and then departed once more to the southern wastes in 1920, only to die whilst on expedition where, at his wife’s request, his remains were interred.

Shackleton is an everyman’s hero – his personal life back in the UK was a mess, relationships strained and finances shambolic and even those who he rescued from a certain death were ambivalent about him for years afterwards – clearly not an easy chap to get along with.

But back to the advert.

Even though it’s a fabrication – it makes a for a good metaphor around telling the truth when it comes to recruitment.

It was Michael Gerber in The E-Myth who coined an excellent phrase to use in your recruitment advertising:

“We are moving fast and looking for runners.”

I wonder, if we applied the same rationale to dental recruitment advertising, what your next job advert would look like?

Here’s a competition for you – a bottle of proper bubbly (with my compliments) to the best “Shackleton-like” dental job advert.

It doesn’t have to be serious but should be respectful and suitable to be read by children.